Influencers or macro-influencers are profiles that have a large number of followers. From >100,000 they are already considered macro-influencers. Previously, celebrities were the only ones who had the power to reach larger audiences, but thanks to social networks, new social media profiles with similar influence are emerging.

Where to search for influencers?

VoxFeed is the biggest influencer marketing platform, to connect brands with brand advocates, nano, micro and influencers. Brands can access for free and can connect, interact, launch campaigns, manage payments and measure results on their influencer campaigns. All through the platform, in an easy, fast and secure way.

With VoxFeed you can select nano, micro and influencers according to their genre, age, location, profile, realiability, reach and interests. 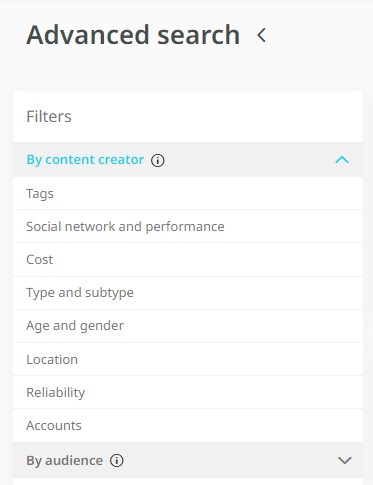 Search for Influencers: By Social Media

Scale your campaigns with micro-influencers and influencers

VoxFeed allows you to segment influencers based on their interests and their audience profile. Find the best micro-influencers for your campaigns according to their gender, interests, audience size, social networks, engagement rate, cost, scope, or location.

Thanks to this feature, you can execute better campaigns with a large number of better-fitting collaborators.